I came across an interesting article in The Atlantic a little while back that discussed the connection between writing and thinking. New Dorp, a Staten Island high school in a poor and working-class neighborhood, was able to improve student performance when they realized that their students couldn’t write. These underperforming students often could read and could do math. The majority of them were well-behaved, and seemed to want to learn. Yet they couldn't pass standard proficiency tests, and couldn't graduate. All because they couldn't form complex sentences.

The harder they looked, the teachers began to realize, the harder it was to determine whether the students were smart or not because the tools they had to express their thoughts were so limited that such a judgment was nearly impossible. 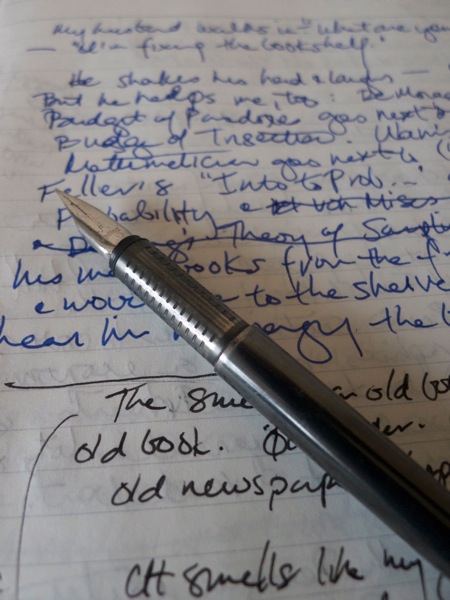 The solution the teachers devised was to teach analytical writing skills in almost every class. For example, in chemistry classes, students had to describe the properties of chemical substances in sentences that used specific subordinate clause forms, such as a sentence with although, or with unless. Students in literature classes had to hold oral discussions using structured sentence forms: "I (dis)agree with your statement because...", "Can you explain your answer?" They had to write expository essays in history class.

The result? Graduation rates have risen from 63% to almost 80% since the beginning of the program. Pass rates on proficiency tests rose from 67% to 89% for the English exam, and 64% to to 75% for the History exam. There's still room for improvement, but the outlook at New Dorp is optimistic.

Reading the Atlantic article, I got the suggestion that knowing how to form sentences and how to express themselves strengthened the students' ability not only to write and to pass tests, but also actually strengthened their ability to think. Once you know that there exist words and phrases like because or for instance that help expand your sentences, to elaborate on your basic premises, then you will want to start using them, right? It's like turning on a faucet.

This apparently causal relationship between writing and thinking is no surprise for anyone who has to write as part of making a living. I find that I often don't truly understand a technical topic until I sit down to write about it. And some of my best non-technical writing happens when I have no fixed notion of what I'm going to say, just a vague idea that I must write about some topic, or that I must expand on some passing thought I had over a cup of coffee. The end result of the article or blog post surprises even me. Usually pleasantly, even.

Here's Joan Didion, from her wonderful essay "Why I Write":

Had I been blessed with even limited access to my own mind there would have been no reason to write. I write entirely to find out what I'm thinking, what I'm looking at, what I see and what it means. What I want and what I fear. ... What is going on in these pictures in my mind?

And here's George Orwell, on why jargon is evil (from the essay "Politics and the English Language"):

A man may take to drink because he feels himself to be a failure, and then fail all the more completely because he drinks. It is rather the same thing that is happening to the English language. It becomes ugly and inaccurate because our thoughts are foolish, but the slovenliness of our language makes it easier for us to have foolish thoughts. The point is that the process is reversible. Modern English, especially written English, is full of bad habits which spread by imitation and which can be avoided if one is willing to take the necessary trouble. If one gets rid of these habits one can think more clearly, and to think clearly is a necessary first step toward political regeneration: so that the fight against bad English is not frivolous and is not the exclusive concern of professional writers.

Orwell is talking about how words like "freedom," "terrorist," or "socialist" gradually lose their true meaning after years of overuse and mis-use, until they become content-free. Dialogue or debate that uses such words therefore also becomes content-free, and we all spend a lot of words saying nothing. When we say nothing, we think nothing: a vicious cycle. Places like New Dorp give us hope that words can feed a virtuous cycle, as well. Words have power.

On the other hand, the New Dorp approach is rather formula-oriented, isn't it? It's old-fashioned, redolent of the old classic high school expository essay form. Remember that? State your thesis. Support it in the body of the essay; each body paragraph has a topic sentence and evidential support. Conclude by restating your thesis and re-examining it in the light of your evidence. The format is clear, and when done properly, it's an efficient way to get a point across. It's also usually quite dry.

There are people who think old-fashioned is a good thing; back to the basics, and all that. There are people who don't. As some civil-rights activist supposedly once said (sorry, I don't remember who): "I am suspicious of people who are nostalgic." With reason: the "good old days" were often not so good, for many different groups of people. In our discussion, that would be the disengaged student.

So the modern teaching approach, apparently, encourages the student to develop self-expression, in the name of keeping them engaged, and fostering creativity. Sentence structure and the craft of organizing your thoughts don't seem to be primary lesson goals. So the Atlantic article claims; I'm not a teacher, and I don't have school-age children, so I don't really know. But if it's true, it's interesting, because some people would claim that the art of creative writing is the antithesis of thinking. Here's Robert Olen Butler, from his book From Where You Dream: The Process of Writing Fiction:

The truth, as always, is probably somewhere in between, but the point is that by Butler's argument, teaching creative writing is not teaching children how to think (it might even be teaching them not to think). And isn't the point of school to teach children how to think? That's what they keep telling us. It's interesting to contrast this with some current discussion about teaching math in schools, for example Andrew Hacker's now-infamous opinion piece from a few months ago, "Is Algebra Necessary?" According to Hacker, algebra is not a life skill; most people won't ever use it again. Putting aside whether that's true (it's not), a similar argument, it seems to me, could be made about creative writing. Why is algebra bad for being allegedly impractical, while analytical writing is bad for being merely practical?

I wouldn't want the pinnacle of my literary achievement to be the high school expository essay, and I do wish I had taken more classes in creative writing during my formal education. The world would be a bland place if it were merely practical. But if writing well begets thinking well, then it transcends the practical: it's essential. And what else should we be teaching in schools, if not the essential?