"No insults, please!" said Pugg. "For I am not your usual uncouth pirate, but refined and with a Ph.D. and therefore extremely high-strung."

-- from "The Sixth Sally, or how Trurl and Klapaucius Created a Demon of the Second Kind to Defeat the Pirate Pugg" 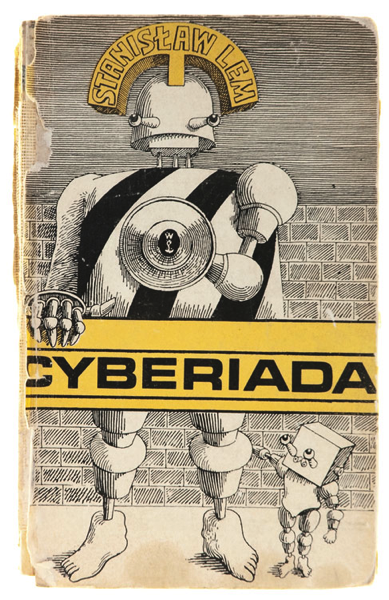 Cover for the 1972 edition of Cyberiada, illustration by Daniel Mróz
Photo from 50watts.com

I learned about Stanislaw Lem as an undergrad at Berkeley, from undergraduate and graduate students in the Math department, where his books were quite popular. At the time, the Berkeley Math PhD program had a foreign language requirement (I don't know if they still do). The idea was that enough cutting edge mathematics research was being published in French or Russian or Japanese language journals -- and elsewhere -- that a serious mathematician would want to access that work even before an English-language translation became available.

The standard way to meet the requirement was to translate a page or so from a Math textbook in the target language. I remember a rumor (or did I dream it?) that one of the grad students fulfilled the requirement by translating a bit of Lem's Cyberiad from the original Polish. Who knows if it's true, but it makes a great story. For The Cyberiad must, indeed, be difficult to translate.

We might add here that later on the constructors had an article published in a prominent scientific journal under the title of "Recursive β -- Metafunctions in the Special Case of a Bogus Polypolice Transmogrification Conversion on an Oscillating Harmonic Field of Glass Bells and Green Gig, Kerosene Lamp on the Left to Divert Attention, Solved by Beastly Incarceration-Concatenation," which was subsequently exploited by the tabloids as "The Police State Rears Its Ugly Head."

-- from "The Second Sally, or the Offer of King Krool"

How does one take the original Polish, and render it into an English that flows like a fairy tale, and yet keeps all the mathematical and scientific puns intact? I can't imagine. No wonder we were all convinced that the translator must have been a mathematician.

Here's a little bit from "The Third Sally, or The Dragons of Probability," which has always been one of my favorites.

The brilliant Cerebron… discovered three distinct kinds of dragon: the mythical, the chimerical, and the purely hypothetical. They were all, one might say, nonexistent, but each non-existed in an entirely different way.…

[Trurl and Klapaucius] were the first to apply probability theory to this area and, in so doing, created the field of statistical draconics, which says that dragons are thermodynamically impossible only in the probabilistic sense, as are elves, fairies, gnomes, witches, pixies, and the like. Using the general equation of improbability, the two constructors obtained the coefficients of pixation, elfinity, kobolding, etc. They found that for the spontaneous manifestation of an average dragon, one would have to wait a good sixteen quintoquadrillion heptillion years. In other words, the whole problem would have remained a mathematical curiosity had it not been for that famous tinkering passion of Trurl…. First, as he was dealing with the highly improbable, he invented a probability amplifier and ran tests in his basement -- then later at the Dracogenic Proving Grounds established and funded by the Academy. To this day those who (sadly enough) have no knowledge of the General Theory of Improbability ask why Trurl probabilized a dragon and not an elf or a goblin. The answer is simply that dragons are more probable than elves or goblins to begin with. True, Trurl might have gone further with his amplifying experiments, had not the first been so discouraging -- discouraging in that the materialized dragon tried to make a meal of him. Fortunately, Klapaucius was nearby and lowered the probability, and the monster vanished.

Theoretical physics would be much more exciting (or at least more marketable) with dragons, don't you think? And constructor robots.

All quotes are from the 1974 English translation of The Cyberiad by Michael Kandel. I have the Harcourt Brace paperback first published in 1985, with awesome illustrations by Daniel Mróz.