There's been a buzz the last few days about the 715 new planets that NASA has verified, using data from the Kepler Space Telescope. This discovery doubles the number of known planets, and turned up four new planets that could possibly support life. 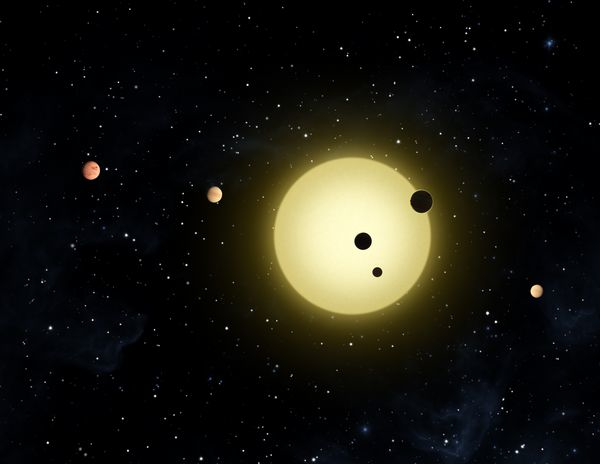 Beyond the sheer joy of the discovery, one of the interesting aspects of this announcement is the statistical technique that NASA scientists used to winnow out so many planets from the data in bulk: verification by multiplicity. Using this technique, scientists can verify the presence of suspected planets around a star sooner, without having to wait for additional measurements and observations.

I got curious: what is verification by multiplicity? I'm no astronomer, but it's not too difficult to grasp the basic statistical reasoning behind the method, as described in Lissauer et al. “Almost All of Kepler’s Multiple Planet Candidates Are Planets,” to be published in The Astrophysical Journal on March 10 (a preprint is available at arxiv.org). My discussion isn't exactly what the researchers did, and I stay with a simple case and avoid the actual astrophysics, but it gets the idea across. I'll use R to work the example, but you should be able to follow the discussion even if you're not familiar with that programming language.

The need for statistical verification

The basic idea behind verification by multiplicity is that planets are often clustered in multi-planet star systems, while false positive measurements (mistaken identification of potential planets) occur randomly. Putting this another way: if false positives are random, then they won't tend to occur together near the same star. So if you observe a star with multiple "planet signals," it's unlikely that all the signals are false positives. We can use that observation to quantify how much more likely it is that a star with multiple candidates actually hosts a planet. The resulting probability can be used as an improved prior for the planet model when doing the statistical validation described above.

Some quantities of interest

Before we start the discussion, some terminology.

We also have to estimate two values. First, P, the fraction of candidates that are actually planets. In this discussion, I'll use P = 0.5, which is a pessimal assumption; in reality (according to the authors) the P is probably more like 0.9. Second, the prior probability that a star has a planet, priorHasPlanet. In this discussion we'll use priorHasPlanet = P * nCandSystems/ntargets, which is about 0.003, or 0.3%, if we assume that P = 0.5. The estimate that Lissauer, et al. use is P * ncandidates/ntargets, which is a little more generous, since it assumes that every candidate is attached to a different star. For the value of P that we are using, the researchers' estimate (0.37%) is not too different from ours.

In English: we observed 791 "singleton" stars. Under our Poisson assumption, we would expect to see about 597 singleton false positives when observing ntargets stars. That means that about 597/791, or 0.75 of our observations are probably false positives, and only about 25% of them are really planets.

The chance of seeing two false positives near a single star is quite low, about a percent. That means with 99% probability, this star has at least one planet! That's a much higher probability than our prior of 0.3%. In fact, the most likely scenario is that both signals are planets: 1 - (p2_2fps + p2_1fp), or 0.974.

You can do something similar with "triple_plus" stars; it's more complicated, but the idea is the same.

These boosts in probability are dramatic, but they depend on several assumed values: P, lambda, and priorHasPlanet. However, the general idea holds: observing multiple false positives around a single star is unlikely, so a star with multiple candidates has an elevated probability of hosting planets, and using the "no information" prior (0.003, in our case) for doing the validation analysis is not optimal. So it looks like what the researchers actually did (despite having gone through a set of calculations similar to the ones above) is to use the empirical counts of stars with multiple candidates to estimate appropriate (and somewhat more conservative) "multiplicity boosts" to the prior. This sort of makes sense; most stars with only one candidate will be false positives; most stars with multiple candidates will host planets (just not necessarily as many planets as there are signals). The boost in signals should mirror the boost in planet probability.

Of course, there are all sorts of caveats. Is the assumption that false positives and planets are uncorrelated valid? When? The Poisson model also assumes that false positives are uncorrelated with each other. Is that assumption valid? There are additional issues around associating candidates with the wrong star, and the signals produced by binary or multiple star systems. But that's all astrophysics, and outside my expertise. The statistics presented in the paper, however, is quite straightforward.

EDIT: SciShow's segment on the Kepler and the planetary verifications referenced this post in its credits! The credits can only be seen on the YouTube page, unfortunately.